Nuclear power, as a rule, is big. Big structures. Big budgets. Producing a big stream of electrons. In the past, it required big government to pull it off. Nuclear has been most successful when it’s had a patron like the U.S. Navy, France’s strong centralized government, or China to clear away any resistance, reach into deep pockets for those big budgets, and find a big market for all those electrons.

But small nuclear power might be better. The Nuclear Regulatory Commission recently gave NuScale Power the go-ahead for its small modular nuclear reactor — the first of its kind. Unlike giant power plants, NuScale’s reactors will be small enough to move down the highway on a big rig. Instead of requiring piles of money for a bespoke mega-project, NuScale thinks it can churn out reactors in a factory cheaply enough to compete with plants fired by natural gas. And rather than working with a massive government customer, NuScale’s first client is a bunch of small Western cities, organized by the Utah Associated Municipal Power Systems.

NuScale says the reactors could ramp up and down as needed (which plays well with wind and solar) and produce carbon-free electricity at something like $55 per megawatt hour. That’s less than half the cost of energy from big new nuclear plants.

Oh, and the plants are supposed to be meltdown-proof. So is small beautiful when it comes to nuclear energy? Or is this all too good to be true?

While it’s true that renewable energy is cheap now, most energy wonks think it will get expensive when renewables are powering the entire grid, which will require building lots of batteries to deal with fluctuations in the sun and wind. Sure, there are studies suggesting it wouldn’t be prohibitively expensive to power the country purely on renewables, but the most accurate ones — which model the nitty-gritty details of how electrical systems work — tend to show that the best way to keep renewable power cheap is by having a source of clean energy that can be turned up when wind dies and the sun is hiding behind the clouds, said Matt Bowen, a research scholar at the Center on Global Energy Policy, at Columbia University.

“In the energy world, there are really two camps: The all-renewables camp and everyone else,” he said. “I’m with everyone else.”

Bowen pointed to a recent report published this January by the environmental consulting group Energy & Environmental Economics, known as E3. The study found that, for electrical power systems in the Pacific Northwest, small modular nuclear reactors would be a significantly cheaper partner for renewables than batteries. 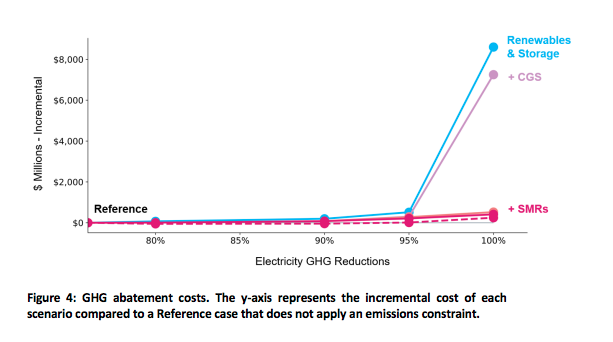 According to E3’s analysis, small modular reactors were the cheapest option for completing the journey all the way to 100 percent clean energy. E3

Small modular reactors still only exist in theory. And there are many people working to make sure they stay that way. After NuScale received the government’s greenlight, Physicians for Social Responsibility, a nonprofit that opposes nuclear power, organized a press conference last week with two critics of NuScale, M.V. Ramana, a physicist at the University of British Columbia, and Edwin Lyman, director of nuclear power safety at the Union of Concerned Scientists. Ramana said that city councils should be skeptical of the promised budget. Back in 2017, NuScale said that it would take about $3 billion to build 12 plants on a generic spot somewhere in the southeastern U.S. Now it’s saying the 12 plants would cost some $6 billion.

“A few years ago they were talking about $65 per megawatt hour,” Ramana said. “Since then the costs have nearly doubled, yet they claim that they can produce electricity for under $55 per megawatt hour. I don’t understand how that is possible.”

Recent history suggests there’s good reason to be concerned about spiraling costs: Nuclear projects have gone spectacularly over budget. An anti-tax group, the Utah Taxpayers Association, is asking towns to back out of the coalition, warning that it’s fiscally risky. Two cities have already peeled off.

During the press conference, Lyman said this project could also pose health risks. He said NuScale’s claim that its reactors can cool themselves in an emergency is no more than “a public relations campaign.” One member of the Nuclear Regulatory Commission recently suggested that NuScale’s safety design might not stop nuclear reaction in all circumstances. Though that wouldn’t lead to a disaster like Chernobyl, or Fukushima, it’s still a serious problem that should be resolved so they don’t cause delays or cost increases later, Lyman said.

All this might make it sound as if this experiment in mini reactors is doomed. But there’s more to the story. The Nuclear Regulatory Commission spent thousands of hours scrutinizing the safety system, and ultimately the regulators and the bureaucrats agreed that it worked, clearing the way for the commission to approve NuScale’s design, said Diane Hughes, vice president of marketing and communications at NuScale.

And Hughes said costs hadn’t actually increased: The higher estimate of $6 billion just includes more equipment that their customers want. The Utah towns had asked NuScale to add a steam-capturing tower to the reactors, so they wouldn’t burn off scarce desert water. NuScale also struck an agreement with the Utah Association of Municipal Power Systems that gives the towns a chance to scrutinize the project cost estimates. If the Power Association determines that electricity will be higher than $55 per megawatt hour, the towns can quit the project and get a refund from NuScale for any money they’d paid. Getting electrical costs down to that level depends on the Department of Energy kicking in $1.4 billion dollars.

Bowen said NuScale’s deal with the Utah towns isn’t the make-or-break test for the next generation of nuclear reactors. There’s a wave of advanced nuclear companies proposing new designs. “Someone else could build them first, but there has to be a first one to that there can be a second, third, fourth to bring down the learning cost curve.”

There’s no shortage of potential customers for small reactors. Thirteen states and 14 big utilities have committed to squeezing 100 percent of the greenhouse gas emissions out of their systems, which means they are going to have to shut down the gas plants that have, up until now, ramped up and down to match renewables. “It’s not a matter of if, but when, these utilities will need to supply reliable carbon-free baseload power,” NuScale’s Hughes said.

How SUVs conquered the world — at the expense of its climate